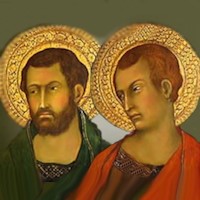 The Church celebrates today the memorial of Saints Timothy and Titus, close companions of St. Paul and bishops of the Church in its earliest days. Both men received letters from St. Paul, which are included in the New Testament. Both showed their readiness to take on leadership in “far from easy” circumstances. And both teach us to serve the Gospel with generosity, realizing that this also always entails a service to the Church herself.”

The son of a Jewish mother and a non-Jewish father, St. Timothy came from Lystra in present-day Turkey. His mother, Eunice, and his grandmother, Lois, are known to have joined the Church, and St. Timothy himself is described as a student of Sacred Scripture from his youth. After St. Paul’s visit to Lycaonia, around the year 51, the young man joined the apostle and accompanied him in his travels. After religious strife forced St. Paul to leave the city of Berea, St. Timothy remained to help the local church. St. Paul later sent him to Thessalonica to help the Church during a period of persecution. Like St. Paul, St. Timothy endured a period of imprisonment in the course of his missionary work. His release is mentioned in the New Testament Epistle to the Hebrews. Around the year 64, St. Timothy became the first bishop of the Church of Ephesus. During that same year, he received the first of two surviving letters from St. Paul. The second, written the next year, urges St. Timothy to visit St. Paul in Rome, where he was imprisoned before his martyrdom.

In contrast with St. Timothy’s partial Jewish descent and early Biblical studies, St. Titus – who was born into a pagan family – is said to have studied Greek philosophy and poetry in his early years. But he pursued a life of virtue, and purportedly had a prophetic dream that caused him to begin reading the Hebrew Scriptures. According to tradition, St. Titus journeyed to Jerusalem and witnessed the preaching of Christ during the Lord’s ministry on earth. Only later, however – after the conversion of St. Paul and the beginning of his ministry – did St. Titus receive Baptism from St. Paul, who called him his “true child in our common faith.”

Let us pray. “God our Father, you gave your saints Timothy and Titus the courage and wisdom of the Apostles: may their prayers help us to live holy lives and lead us to heaven, our true home. Through our Lord Jesus Christ, Your Son. Amen.”