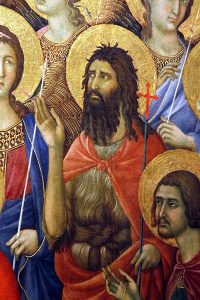 “John came to bear witness to the light, to prepare an upright people for the Lord.”

John the Baptist played a unique role in the history of God’s people. He acted as the bridge between the Hebrew (Old) and Christian (New) Testaments. He basically belongs to the former, but was present at the beginnings of the latter. At the same time, he died before Jesus had completed His work and before the Church came into existence. Jesus praised his greatness but at the same time said that even the least in the Kingdom was greater than he. While he knew and proclaimed Jesus as the one that all were waiting for and the thongs of whose sandals he was not worthy to loosen, the Baptist never saw Jesus as his Risen Lord, a privileged granted to “the very least” of the baptized.

John’s primary title is Precursor. His mission was to go ahead of the Messiah and proclaim His coming. As he said modestly himself, “Jesus must increase while I must decrease.” Especially on this Feast of his Birth, John the Baptist’s life has a special meaning for all of us. We are, through our baptism, also called to be precursors of the Lord. Our baptism imposes on us an obligation to share our faith and to give witness to the Way of Jesus, both in word and action. There is no other way by which the average person can come to know and experience the love of Christ. It is well put by St. Paul, writing to the church at Rome: “Everyone who calls on the name of the Lord will be saved. But how can they call on Him in whom they have not believed? And how can they believe in Him of whom they have not heard? And how can they hear without someone to preach? And how can people preach unless they are sent? As it is written, ‘How beautiful are the feet of those who bring the good news!’” (Romans 10,13-16)

Let us ask St. John the Baptist today (on the Church’s Feast of his Birth) to help us, by the way we live our lives, to clear a path which will draw people closer to knowing and experiencing Christ.