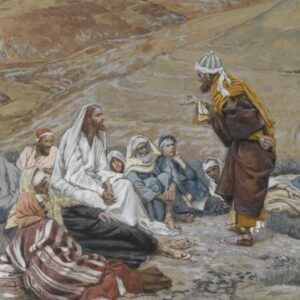 Ecclesiastes 3, 1-11 begins with these words: “There is an appointed time for everything, and a time for everything under the heavens.” Although this well-known passage became part of a popular song in the early 1960s, it is part of a longer passage whose overall theme is death, the inevitable end of every life. Life is presented in this Old Testament book as equally divided between things which bring pleasure and sadness, comfort and pain. Each has its own “time slot,” so to speak, and we have little control over one or the other.

Ecclesiastes eventually makes the point that only one thing remains supreme – the all-knowing and all-loving God. We are totally in His hands and the sooner we realize that the happier we will be! After all, we are pilgrims passing through this life. We have no permanence in this world. The important goal is not to be reached here. The ultimate goal is beyond this life, in God’s loving and glorious presence.

The Church remembers today the Italian Franciscan priest St. Pio of Pietrelcina, better known as “Padre Pio” and known for his suffering, humility and miracles. When he entered the Franciscan Order, he took the new name Pio, a modernized Italian form of “Pius,” in honor of Pope St. Pius V. He made his solemn vows four years later, and received priestly ordination in the summer of 1910. Shortly after, he first received the Stigmata – Christ’s wounds, present in his own flesh.

Against his own wishes, his reputation for holiness, and attending miracles, began to attract huge crowds. All the while, he expressed his desire to “just be a simple Friar.” Known for patient suffering, fervent prayer, and compassionate spiritual guidance, Padre Pio also lent his efforts to the establishment of a major hospital, the “Home to Relieve Suffering.” He died in 1968, and was declared a saint in 2002. “Padre Pio, pray for us.”