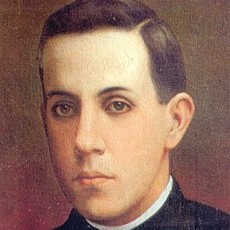 Blessed Fr. Miguel Pro was a Jesuit priest who was executed by a firing squad in Mexico for exercising his priestly ministry during the persecution of the Church in Mexico during the last century.

Sadly, in Mexico, beginning in 1917, anti-Catholic laws were passed that did not allow priests to minister publicly, or even to wear clothing that identified them as priests in public. People had to be ministered to clandestinely in their homes and in an “underground” manner. During this time, the League for the Defense of Religious Liberty began to fight back against the oppression. They came to be known as the “cristeros” or Soldiers of Christ.

Fr. Pro was known, among other things, for his great works of charity. The poverty level in Mexico at the time was so extreme that Fr. Pro, in addition to carrying out his spiritual duties, had an active ministry providing the poor with food, clothing, and shelter.

On November 23, 1927, as Fr. Pro, who had been arrested for defying the government,walked from his cell to the courtyard and the firing squad, he blessed the soldiers, knelt, and briefly prayed quietly. Declining a blindfold, he faced his executioners with a Crucifix in one hand and a Rosary in the other and held his arms out in imitation of the crucified Christ. He shouted, “May God have mercy on you! May God bless you! Lord, you know that I am innocent! With all my heart I forgive my enemies!”

At Fr. Miguel’s Beatification at Saint Peter’s in 1988, Pope John Paul II said: “Neither suffering nor serious illness, nor the exhausting ministerial activity, frequently carried out in difficult and dangerous circumstances, could stifle the radiating and contagious joy which he brought to his life for Christ and which nothing could take away. Indeed, the deepest root of self-sacrificing surrender for the lowly was his passionate love for Jesus Christ and his ardent desire to be conformed to him, even unto death. Blessed Miguel Pro, Pray for us!

More on the life of Blessed (Fr.) Miguel: https://www.jesuits.global/saint-blessed/blessed-miguel-agustin-pro/