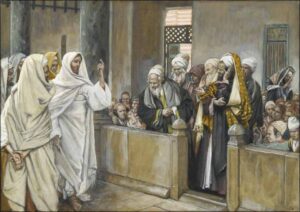 We have all had teachers in the course of our lives. We have had them in elementary school, in secondary school, at higher levels of education, or even in other less formal educational contexts. Some of those teachers (hopefully, very few) we might prefer to forget, but others (hopefully, many) we remember with great fondness. Some of them had a significant influence for good on us. They inspired us with a love for the subject which they taught and we may have gone on to study it ourselves. They shared some expertise with us and encouraged us to head off in a direction of our own. We do well to thank God for their influence in our lives.

In today’s Gospel, the people of Capernaum recognize Jesus as one who had come to their synagogue as a teacher, and not just another teacher or any old teacher, but a teacher who was very different than the teachers they had grown used to, the scribes, the supposed experts in the Jewish Law. His teaching, we are told, “made a deep impression on people, because, unlike the scribes, He taught them with authority.” The people in the synagogue exclaimed, “Here is a teaching that is new and with authority behind it.”

This episode in the synagogue where Jesus taught with authority and healed a man with an unclean spirit is the first public act of Jesus in St. Mark’s Gospel. So, according to St. Mark, Jesus first appeared on the scene as an authoritative teacher, as someone whose teaching, whose word, could deliver people from their demons, from the forces that were oppressing them and leaving them diminished as human beings. He was recognized as a person “of authority” because of the word that He spoke and the impact, for good, of that word on others. Ultimately, His authority was rooted in God, in the Spirit of God which descended upon Him at His Baptism.

The imposing figure of G.K. Chesterton, the English writer and convert to Catholicism, was apparently often seen squeezed behind a table in London restaurants. During one of his “literary lunches,” Chesterton was expounding on the relationship between power and authority. He described the difference in these terms: “If a rhinoceros were to enter the restaurant now, there is no denying he would have great power here, but I should be the first to rise and assure him that he had no authority whatever.”

For us, Jesus remains the ultimate authority. Like the people of Capernaum, we recognize His authority, the authority of His teaching and His deeds, the authority of His life, death, and resurrection. That is why we confess Jesus not just as our teacher, but as our Lord. We are happy to submit to His authority, to His lordship, because we recognize that in doing so we will have life to the full, and, like the man in the Gospel today, be freed of those spirits that prevent us from becoming the people God intends us to be.

There can be great reluctance these days to submit to anyone. The value of personal autonomy is highly prized and sought after. Yet, it is not possible to live without submitting to some authority, even if it is the authority of the self. What matters is to submit to the right authority and today’s Gospel suggests that such authority is to be found in the person of Jesus.

Let us pray. “Grant us, O Lord, that we may honor you with our whole heart, mind, and soul … and love everyone in truth. Through Christ our Lord. Amen.”