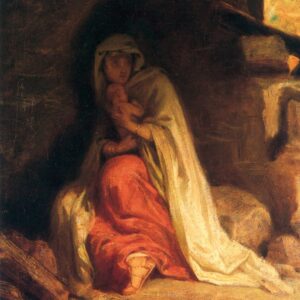 The Church’s Feast of the Holy Innocents acknowledges that Christmas, as Pope Francis has put it, “is also accompanied, whether we like it or not, by tears.” Today we remember those innocent children who were the first martyrs and who serve today as pro-life patron saints. Their story appears in the Gospel of Matthew:

After Jesus’ birth, King Herod the Great of Judea – named “king of the Jews” by the Roman Senate – learned of this “newborn king of the Jews” from the Magi. Troubled by the news, he deceivingly asked the Magi to report back to him Jesus’ location “that I too may go and do him homage.” But a dream warned the Magi not to return to Herod. St. Matthew (2, 16-18) records what happens next. “When Herod realized that he had been deceived by the Magi, he became furious. He ordered the massacre of all the boys in Bethlehem and its vicinity who were two years old and under, in accordance with the time he had ascertained from the Magi,” the Gospel reads. “Then was fulfilled what had been said through Jeremiah the prophet: ‘A voice was heard in Ramah, sobbing and loud lamentation; Rachel weeping for her children, and she would not be consoled, since they were no more.’”

Sadly, such an act of cruelty perfectly corresponds with Herod’s paranoid and merciless character. History records that Herod was quick to execute anyone he perceived to threaten his rule, including his wife and children. As Pope Francis has said, “The tears we remember today are from the sobbing of mothers bewailing the death of their children in the face of Herod’s tyranny and unbridled thirst for power.”

Let us pray. “O God, the Holy Innocents offered you praise by the death they suffered for Christ. May our lives bear witness to the faith we profess with our lips. Through Christ our Lord. Amen.”