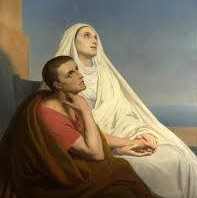 St. Monica was born in 332 at Tagaste (in modern-day Algeria). Her parents brought her up as a Christian and married her to an older, pagan man named Patricius. He was a man of great energy, but he also had a violent temper and was promiscuous. Her almsgiving and habit of prayer irritated him yet led him to respect her. It was said that by her kindness and patience, she was able to exercise a good influence within their family and beyond the walls of their home. Other wives knew that she suffered as they did and so were moved by her example. After many long years of marriage, she converted her pagan husband (and her mother-in-law) to Christianity.

St. Augustine was the eldest of St. Monica’s three children. He made her happy because of his successes as a scholar and teacher, but she was also ashamed of his behavior. Although she asked a bishop to convince her son of his errors, he was not able to change the young man. He told her to keep praying for her son – and she did. Eventually, it was through St. Ambrose, the bishop of Milan, that St. Monica had the joy of seeing her son converted to the Christian faith. By then, he was 28 years old and she had been praying for him from the beginning, but in an intense way for the previous 17 years.

When she was 56 years old, St. Monica was near her own death. Her last words to her son were: “There was indeed one thing for which I wished to tarry a little in this life and that was that I might see you a Christian before I died. My God hath answered this more than abundantly, so that I see you now as his servant spurning all earthly happiness. What more have I to do here?” After her death, her son wrote extensively of her virtues and his life with her in his Confessions.

As part of the 1969 revision of the Roman Catholic calendar of saints, St. Monica’s feast was moved to August 27, the day before the feast of her son St. Augustine. She is the patron saint of patience, wives, mothers, and victims of abuse.

Let us pray. “St. Monica, we give thanks to God in heaven, who looked with mercy upon your tears over your wayward son. His conversion and heroic sanctification were the fruit of your prayers. We now ask you to pray with us for all those who have wandered away from God. Pray with us as well for all mothers who are worried over their children. Through the Lord’s help, may we follow your example and, in the company of those we love, may we one day enjoy the eternal vision of all the saints in heaven. Through Christ who lives and reigns for ever and ever. Amen.”