April 5: Easter Monday (in the Octave of Easter) 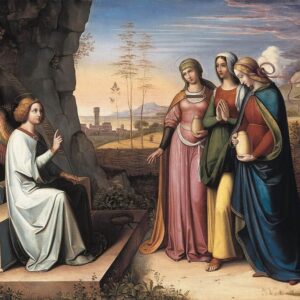 In Matthew 28, 8-15, some of the women who are disciples of Jesus are told to instruct the other disciples that they will see the Risen Lord in Galilee, their own place. Galilee is, truly, their home ground, the place where they were born, grew up, and worked. That is where the Risen Jesus is to be found.

Does it come as a surprise that that is where we should expect to see Him, too? The very same instruction the women were given has made its way through the centuries. We are invited to find the Risen One on our home ground. We do not have to go to Jerusalem or Rome or Lourdes or Fatima to find Him. In fact, if we cannot find Him in the place where we live and work, we won’t find Him in those other places either.

What is the Octave of Easter? Easter Sunday and the following seven days present a special time to bask in the glory of the Resurrection. The Octave is one of the lesser-known liturgical observances in the Church, but it includes Easter Sunday and the seven days that follow, culminating in the celebration of the Second Sunday of Easter (also known as Divine Mercy Sunday).

Starting from at least the 3rd or 4th century, Christians began to extend certain feasts beyond the initial day. This meant that the joyous celebrations of Easter Sunday were prolonged and lasted a full eight days. In fact, early Christians treated each day in the Octave as if it were Easter Sunday.

Although Catholic culture still runs headlong into secular culture these days, the Octave remains (ideally) a celebratory time for us and is meant to be a joyous time to remain in the beauty of the Lord’s Resurrection.

As the saying goes, “Easter is more than a day!” The fifty-day season only begins with Easter Sunday (and the Octave). This is a season for feasting, praising God, and enjoying the company of family and friends. Gone are the fasting days of Lent! Even the weekly Friday abstinence, which many Catholics practice all year long, is suspended this week on Easter Friday. Now is the time to feast! “Jesus is Risen! Alleluia!”