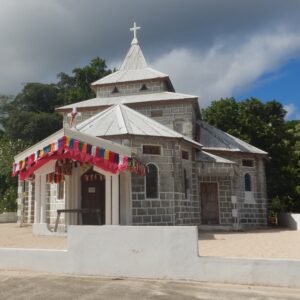 The Church celebrates today the Feastday of St. Peter Chanel. He was born in France 1802 and died on the Island of Futuna on April 28th, 1841. He was ordained priest in 1827, engaged in parish ministry for a few years in France, and then began to read the letters of missionaries in far-away lands. The accounts of these saints inflamed his heart with zeal, and he resolved to devote his life to missionary work.

In 1831, he joined the Society of Mary (the Marist Fathers), and in 1836 he embarked for Oceania (the South Pacific). He was assigned to the Island of Futuna, and landed there in 1837. No Christian missionary had ever set foot on the island, and the difficulties he encountered were many. Despite little apparent success and severe want, he maintained a serene and gentle spirit, showing endless patience and courage. Nevertheless, he was beginning to see the results of his efforts, when Niuluki, king of the island, already jealous of the progress of the new religion, was exasperated by the conversion of his own son and daughter.

At the king’s instigation, some of the enemies of Christianity captured St. Peter and he was cruelly martyred, without uttering a word of complaint. Through his death, St. Peter obtained what he had so ardently desired and earnestly worked for: the complete conversion of Futuna. In 1842, two Marist missionaries resumed his work, and it is said that nowhere has the preaching of the Gospel produced more wonderful results. The vast majority of Futunans still profess the Catholic faith.

St. Peter Chanel is the patron saint of all of Oceania (including Australia, New Zealand, American Samoa, Samoa, Tonga, Fiji, Futuna, and more than 30 other Island Communities). Photo: Church of St. Therese in Futuna.