Feast of the First Christian Martyrs in Rome 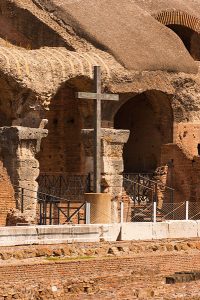 Wherever the Good News of Jesus has been preached, it has met the same opposition as Jesus did, and many of those who began to follow Him early on shared His suffering and death. But no human force could stop the power of the Spirit unleashed upon the world. The blood of the martyrs has always been, and will always be, the seed of Christians. The Church’s liturgical calendar is a continual, public remembering of saints, feasts, and theology. Today, the Church celebrates the Feast of the First Christian Martyrs in Rome.

There were Christians in Rome within a dozen or so years after the death of Jesus, though they were not the converts of St. Paul, the “Apostle of the Gentiles” (Romans 15,20). He had not yet visited them at the time he wrote his great letter in about 58 A.D. This feast is akin to the wreath-laying ceremony at the Tomb of the Unknown Soldier or the flowers left at a mass grave marker. We remember those unknown and unnamed men and women who were cruelly tortured and executed in the city of Rome in 64 A.D. In July of that year, more than half of Rome was destroyed by fire. Rumor blamed the tragedy on Nero, who wanted to enlarge his palace. He shifted the blame by accusing the Christians. According to the historian Tacitus, many Christians were put to death because of their supposed “hatred of the human race.” Saints Peter and Paul were probably among the victims.

Let us pray. “Anonymous first martyrs of Rome, your blood is a testament to your faith, your sufferings are still felt, in the same Church of Christ to which you belonged through baptism. Through your intercession, help all of us, the baptized of today, be as courageous as you in all things. Through Christ our Lord. Amen.”

(Photo: The Cross of the Martyrs in the Colosseum, Rome.)