“To be understood as to understand,
To be loved as to love, For it is in giving that we receive. . .”
~ from The Prayer of Saint Francis

Mr. Davis is teaching the fifth grade and also middle school science at Holy Cross. His most significant memory of Holy Cross is that many of his friends he had then he still has today. Since Mr. Davis has returned to Holy Cross to teach, he’s experienced many changes. The dress code has been enhanced, and there aren’t any nuns teaching any more. Also, there is a Kindergarten class which didn’t exist when he went to Holy Cross.

There are a few unique aspects Mr. Davis likes about Holy Cross. “There is a whole school Mass every Wednesday, and most of the students are from the North Portland area.” Mr. Davis loves to be a teacher, but he says, “If I wasn’t a teacher, I think I might like to be a fire fighter.” The experience Mr. Davis had at Holy Cross is the major reason he is teaching there. 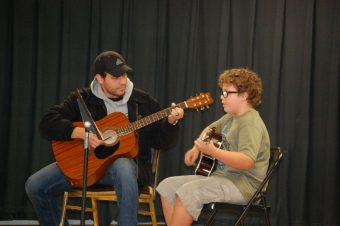