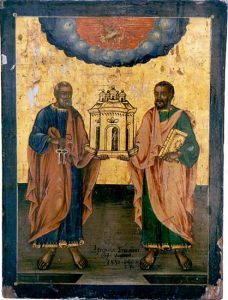 On June 29th we celebrate a special feast of the Church, symbolized by the two great Apostles, Saints Peter and Paul. They were the two men around whom the mission of Jesus to establish the Kingdom was centered and from whom it grew and spread to every corner of the world. As the preface prayer for today’s Mass puts it: “Peter raised up the church from the faithful flock of Israel. Paul brought your call to the nations, and became the teacher of the world. Each in his chosen way gathered into unity the one family of Christ. Both shared a martyr’s death and are praised throughout the world.”

Each of these Apostolic Fathers represents a distinct role of the Church in its mission to the world. Each offers us a unique perspective on just what it means for us to be One, Holy, Catholic, and Apostolic.

Peter represents that part of the Church which gives it stability: its traditions handed down in an unbroken way from the very beginnings, the structures which help to preserve and conserve those traditions, the structure which also gives consistency and unity to the Church, spread as it is through so many races, cultures, traditions, and geographical diversity. Peter today is represented by the pope, who is the great symbol of unity and continuity. Without his role we would see the Church break up and disintegrate, which has happened to such a large extent with those parts of the Church, which broke away from the central body. A number of the mainline non-Catholic Christian churches realize today the importance of that central role of Peter and they are trying to find ways by which we could all become one Church again, ways by which diversity could be recognized but divisions removed, that all who believe in Christ might find and express that unity for which Christ prayed during the Last Supper.

Paul, on the other hand, represents another key role: the prophetic and missionary role. It is that part of the Church which constantly works on the edge, pushing the boundaries of the Church further out, not only in a geographical sense but also pushing the concerns of the Church into neglected areas of social concern and creatively developing new ways of communicating the Christian message. This is the Church which is semper reformanda, a Church which needs to be constantly renewed. This renewal is spurred on by the Church’s contact with the surrounding world, which is itself constantly changing and, in our own times, changing with bewildering speed. Not only new technologies, but new knowledge and new ideas continue to surface. Our rapidly changing societies call on us to express the core of our faith in new ways.

Let us pray. Lord our God, encourage us through the prayers of Saints Peter and Paul. May these Apostles who strengthened the faith of the early Church help us on the way of salvation. Through Christ our Lord. Amen.