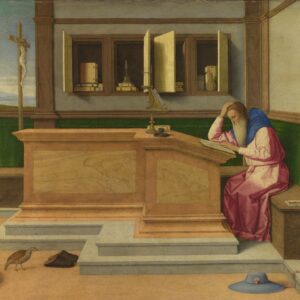 The Church celebrates today the feastday of Saint Jerome, a priest, monk, and Doctor of the Church. He has always been renowned for his extraordinary depth of learning and translations of the Bible into Latin in what is called “the Vulgate

Besides his contributions as a Church Father and patronage of subsequent Catholic scholarship, St. Jerome is also regarded as a patron of people with difficult personalities—owing to the sometimes extreme approach which he took in articulating his scholarly opinions and the teaching of the Church. He is also notable for his devotion to the ascetic life, and for his insistence on the importance of Hebrew scholarship for Christians.

Born around 340, St. Jerome grew up and received Christian instruction from his father, who sent him to Rome for instruction in rhetoric and classical literature. His youth was thus dominated by a struggle between worldly pursuits and the inclination to a life of faith.

Later, seeking a life akin to the first generation of “Desert Fathers,” St. Jerome entered monastic life. He undertook to learn Hebrew and, somewhat unusually for a fourth-century Christian priest, he also studied with Jewish rabbis, striving to maintain the connection between Hebrew language and culture. St. Jerome spent 15 years translating most of the Hebrew Bible into its authoritative Latin version. His harsh temperament and biting criticisms of his intellectual opponents made him many enemies in the Church and in Rome. He eventually went to Bethlehem, established a new monastery, and lived the rest of his years in study, prayer, and asceticism.