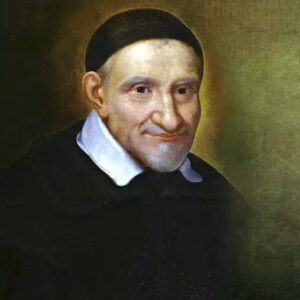 The famous anthropologist Margaret Mead was asked what she thought was the earliest sign of true “human civilization.” She responded, “The earliest sign of human ‘civilization’ is not a clay pot, or tools made of iron, or the first domesticated plants which could be harvested and eaten. It is a mended femur! The ancient  remains of a man with a mended femur show that someone must have cared for him while he was injured, someone must have hunted on his behalf, brought him food, and served him at some personal sacrifice.” Lo’ and behold, the first step to civilization is an act of human compassion … and it becomes the foundation to all the other great achievements of humankind.

September 27th marks the Church’s celebration of the feastday of St. Vincent de Paul. Contrary to popular belief, he did not establish the St. Vincent de Paul Society. That was done 150 years later, but the Society was given his name because of his deep and abiding compassion.

It was Frederic Ozanam who founded the Society. He was devoted to St. Vincent, who is the patron saint of charitable societies, and he modeled the Society on the call to “see Christ in the poor and to be Christ to the poor.” The members of the Society of St. Vincent de Paul (including those here in our parish) continue to honor his life and legacy by helping people in need and do not discriminate against cultural, religious or political beliefs.

Let us pray. “Tender God, refuge of the poor, you filled St. Vincent with the strength and grace to work for the salvation of the poor. May we who follow the example of his life be driven by unceasing charity to continue the mission of Your Son in the world, who lives and reigns with you forever and ever. Amen.”