September 15: Feast of Our Lady of Sorrows 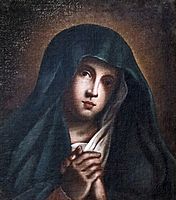 In the mysterious plan of God, Mary was drawn by the Lord into such an intimate relationship with her Son, Jesus, that His saving work cannot be separated from her total gift of herself, in loving obedience, to that plan. This gift, one of generosity, courage, and faith, was first  expressed by Mary’s “yes” to the angel at the time of the Annunciation, but it was renewed throughout her life –  as every mention of her in the Gospels testifies. On today’s Feast of Our Lady of Sorrows, we celebrate that her “yes” was completed, in a sense, as she stood by her Son’s Cross as He give His life for us. Her “yes” was also confirmed and rewarded by God through the mystery of her Assumption into the fullness of life in heaven.

When St John, in his Gospel account of the Lord’s death, tells of the Lord’s entrusting of His mother and His beloved disciple to each other, he is trying to tell us so much more than that Jesus wanted to make sure his mother would be looked after once He was gone. In St John’s Gospel, and indeed in the other Gospels, Mary is always presented as a woman of faith and as the great model of faith. At the same time, the Beloved Disciple is also presented as a great example of faithful discipleship. He, after all, is the only one to stand by Jesus at His time of greatest need, and at the time of greatest danger for His followers. Mary and the Beloved Disciple at the foot of the Cross represent what the Church is called to be: a community of trusting faith and courageous discipleship. In giving Mary and the Beloved Disciple to each other as He was dying, Jesus was both establishing His Church in them and indicating what the Church was meant to be.

Mary means so much to us, but today’s Feast allows us to remember in a special way that we are called to be, like she was, first and foremost, disciples of Jesus. Just as Mary accompanied Jesus through His life and to His death, and just as she joined the first community as they awaited the promised gift of the Holy Spirit at Pentecost, so now, Assumed into heaven through her union with her Son’s Resurrection and Ascension, Mary accompanies us and supports us with her presence, her prayers, and her motherly concern for us in our own journey of faith.