October 28: The Feast of Sts. Simon and Jude 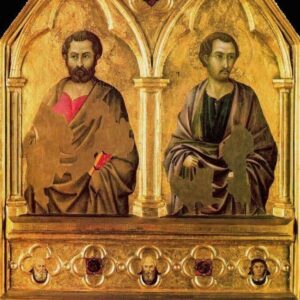 As is true with a good number of Saints from the early centuries of the Church, apart from their names in the Gospels, there is very little we know definitely about Sts. Simon and Jude. Nonetheless, we celebrate the Feast of these two Apostles today. We remember that following the example of the Apostles is the most certain and direct path to heaven. They suffered and were persecuted, but they placed their confidence in God and now they rejoice in heaven. We are encouraged to have confidence in God, as they did, and not be troubled in our adversities.

In Luke 6,15, St. Simon is called the Zealot. The Hebrew word qana means “the zealous one” but some, like St Jerome, misread it as a reference to the town of Cana or to the region of Canaan. The preferred reading in all the Gospel texts now is “Zealot,” which may indicate membership in a strict Jewish sect. There was a party called Zealots famous in the war of the Jews against their Roman occupiers.

St. Jude, called “Judas, son of James” in Luke 6,16 is commonly identified with Thaddaeus, who appears in the list of the Apostles in Matthew and Mark. He is also held to be the author of the Letter in the New Testament bearing his name. As with St. Simon, nothing certain is known of his life after Pentecost, but there are many legends. It is thought that he joined up with St. Simon to preach the Gospel in Persia, where they died as martyrs.

Let us pray. “O God, who gladden us today with the Feastday of the Apostles Simon and Jude, grant us, through their prayers, a share in the Passion and Resurrection of Christ your Son, so that we may come to behold you for all eternity. Through our Lord Jesus Christ, who lives and reigns with you for ever and ever. Amen.”

Bonus: In more modern times, St. Jude has acquired the reputation as the “patron of hopeless cases,” as attested by expressions of gratitude in Catholic devotional materials. The origin of this devotion is said to be that everyone was reluctant to pray to him because his name was so like that of the traitor Judas Iscariot. Only people who had tried every other option would, in desperation, turn to him!