November 27-28: Preparing for this Sunday’s Mass 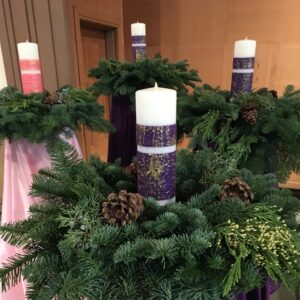 Several years ago a bus driver in Oklahoma reached an unusual record. In 23 years, he had driven a bus over 900,000 miles without a single accident. When asked how he had done it, he gave this simple answer: “Watch the road.” In the Gospel for the First Sunday of Advent (Luke 21, 25-28. 34-36), Jesus gives much the same advice in several ways: “Be vigilant at all times. Stand up straight. Raise your heads. Beware that your hearts do not become drowsy.” Watch the road! This is not only a helpful rule for daily life, but also good spiritual advice for the Advent season.

An ancient Advent prayer supplies us with this wisdom: “Give us grace that we may cast off the works of darkness and put on the armor of light.” We who live much of the time in the darkness are waiting not just during Advent, but at all times for the Advent (or coming) of light, of that ultimate light that is both redemptive and terrifying. It is redemptive because it puts an end to the darkness. But that is also why it is terrifying, because for so long, for so many of us, the darkness has been home, it is where we are comfortable, it is what we know best, and to leave “home” is often a cause for fear.

Advent invites us to give a spiritual dimension to our waiting. We are preparing to celebrate Jesus’ first coming at Christmas, which is obviously a big event in our liturgical year. But we are also preparing for His coming every moment of every day … in His Word, in His Sacraments, in family life, in our friendships, and in so many other ways. Again, the Gospel this weekend and the season of Advent remind us: Watch the road!

Along with Christ’s coming in the past and His coming among us in the present, we also do well to treasure His promise to come again in glory. It might seem a daunting task to keep all three of these “Advents” before us at the same time, but we’re up to the task. We’ve been down this path before.

For further Advent reflection: A theologian had a painting of the Crucifixion on the wall of his study. In the painting there was an image of St. John the Baptist, his extra-long finger raised in the air, directing and pointing the onlooker to the Cross of Jesus in the center of the painting. It is said that when the theologian would talk with a visitor about his academic work, he would direct them to the Baptist in the painting, and he would say, “I want to be that finger. I want to be a sign pointing always to the victory of Christ.”

Let us pray. “Lord Jesus, when you tell us to be ready, you are telling us to be ready to answer your radical call to action, to active waiting, and to vigilance in our pursuit of justice. You are calling us to always be prepared to live your Gospel in a real, practical way, always living in such a way that our life is a convincing and attractive sign that a new beginning is near. May your grace help us ‘Watch the road!’”