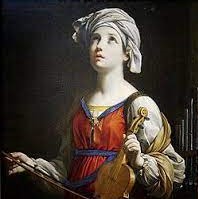 And so, just as Herod tried to do with Jesus, the eternal King, tyrants try to stamp out the Church and the eternal Kingdom. The Roman emperors tried. The barbarian tribes of northern Europe tried. The Medieval Islamic Caliphs tried. The French Revolutionaries tried. Napoleon tried – he even kidnapped the Pope, twice! The Nazis tried, and many others tried, too, giving the twentieth century the bittersweet honor of having more Christian martyrs than any previous century.

The tyrants of every generation try to take over the throne that only Christ can occupy, but the Church continues to survive, grow, and spread. A favorite example of this “unconquerability” of our Faith is found in St. Cecilia, one of the most famous of the Roman martyrs (whose feastday is celebrated today).

St. Cecilia lived in the third century and willingly died for the Faith. May she intercede powerfully for us and our world today.