May 27: Feast of St. Augustine of Canterbury 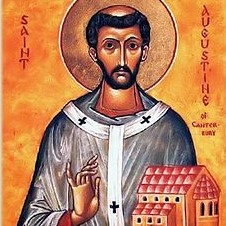 In an interesting twist, an Italian Benedictine monk became the “Apostle of the English.” Today we honor and remember Saint Augustine of Canterbury. Under the direction of Pope Saint Gregory the Great, Augustine founded the famous See of Canterbury and preached the Catholic faith to the country’s Anglo-Saxon pagans during the late sixth and early seventh centuries.

The Benedictine community he had joined had been recently established by a monk named Gregory, who would go on to become Pope and eventually be known as St. Gregory the Great. The friendship between Gregory and Augustine had great historical consequences, as it was the Pope who would eventually send his friend and fellow monk to evangelize England.

The Catholic faith had already been preached and accepted among England’s original Celtic inhabitants in earlier times, but from the mid-fifth century onward, the country was dominated by Anglo-Saxon invaders who did not accept Christianity. Thus, England largely had to be evangelized anew.

After only a few years and by Christmas of 597, over ten thousand people were actively seeking Baptism from the Benedictine missionaries. St. Augustine did not see success in all areas of his work, but he gave the faith a firm foothold among the Anglo-Saxons.

Let us pray. “O Lord our God, who by your Son Jesus Christ called your Apostles and sent them forth to preach the Gospel to the nations: we bless your holy name for your servant St. Augustine, first Archbishop of Canterbury, whose labors in spreading the faith among the English people we remember today. We pray that all whom you call and send this day may do your will, be faithful to your Way, and see your glory, through Christ our Lord, who lives and reigns with you for ever and ever. Amen.”