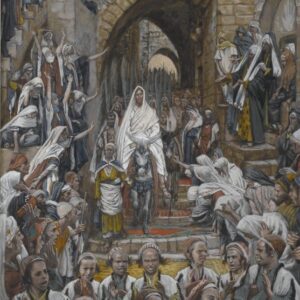 “They brought the colt to Jesus and put their cloaks over it. And He sat on it. Many people spread their cloaks on the road, and others spread leafy branches  that they had cut from the fields. Those preceding Him as well as those following kept crying out: “Hosanna! Blessed is he who comes in the name of the Lord! Blessed is the kingdom of our father David that is to come! Hosanna in the highest!” (Mark 11,1-10)

Among people of the ancient Middle East, their cloaks were their single most important and valuable piece of clothing. It was the most expensive article of clothing anyone had in those days. Constantly mended, a cloak was never discarded. For the poorest of the poor, it was their shelter. For the wealthiest, it was their badge of success. Lent has offered us the chance to place before Jesus what is most important to us. Lent has given us a chance to do without those things, to offer them up. What have we been willing to place before the Lord so that His love and His presence might be seen more clearly in our lives?

Today, what began with the ashes of palms five weeks ago, ends with new palms. What begins with a triumphant procession into Jerusalem, ends with another procession of shame leaving Jerusalem. Jesus rides in with glory and shouts of joy, He walks out with jeers and scorn. Contrasts are everywhere if we care to look.

During our Lenten days, willing to sacrifice what is important to us, willing to lay our cloaks before Him, and walking faithfully in the path of the Lord, something has happened to us, and for all believers: there is no avoiding the reality and the truth of it. Jesus Christ, the Son of God has shown us “the way” and called us to follow Him – all the way to Calvary. There is much here to wonder about, and even more here to be grateful for. Like the crowds who acclaimed Jesus in Jerusalem, let us enter into this week in His peace.