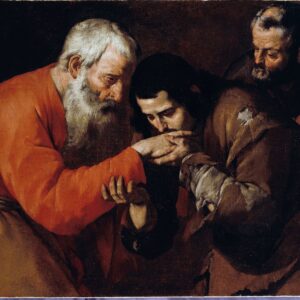 Whereas the third of three parables in Luke 15 has always been called “The Prodigal Son,” the clear protagonist of the parable is the father. Twice he repeats his cry of joy (Luke 15, 11-32): “This son of mine was dead and has come back to life; he was lost and is found.” This cry reveals what’s in the father’s heart. This father isn’t worried about his own dignity or honor, nor how his son has treated him. He does not use the language of morality, but only thinks about his son’s recovery – his precious son isn’t dead after all, but is restored to life! Even when the returning son makes his dramatic re-entry into the parable and is still some way off, the father spots him, recognizes him, and is moved deep down in his heart.

Jesus tells this (and the two parables that precede it in Luke 15) in order to affirm for us that only the father’s, or should we say “the Father’s” kindness and compassion can save us. Only God sees us, recognizes us, and understands us so fully. Look at who does the running: it’s not the homecoming son, it’s the father who runs and who reaches out in welcome. “He put his arms around him and kept kissing him.” Jesus tells us that God is like that: running with open arms to welcome us when we come back.

The father even interrupts his son’s confession to save him more humiliation. He doesn’t impose a penance, demands no ritual of “expiation,” places no condition on welcoming him home. The father cares about his son’s dignity. Then, the son is to be received at a banquet celebrated in his honor. To his amazement, the son is restored to the happiness of the life he had so casually thrown aside when he left.

Whoever listens to this parable from the heart, will know it applies to himself, or herself. Whoever listens to it will feel, maybe for the first time, that in the depths of life there is Someone who welcomes us and forgives us, unconditionally. There is Someone who wants us to have the fullness of life. Why else would we be so frequently encouraged to “turn away from sin and be faithful to the Gospel?” God’s greatest desire for us is to share in the fullness of life – His life!