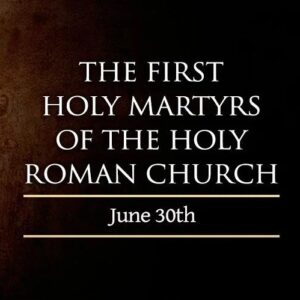 The Church celebrates today the memory of the first martyrs in Rome, the first Christians persecuted en masse by the Emperor Nero in the year 64. These scores of men and women were put to death even before the martyrdom of Saints Peter and Paul.

The emperor was widely believed to have caused a fire that burned down much of Rome. Nonetheless, he blamed the fire on the Christians in the city. Many of the martyrs whom we remember today died by crucifixion, being fed to the wild animals in the Circus Maximus, or being burned. Somewhat ironically, the site of Nero’s Circus is today within the Vatican, next to St. Peter’s Basilica.

These martyrs were called the “Disciples of the Apostles” and their firmness in the face of their gruesome deaths was a powerful testimony that led to many conversions in the early Roman Church. An important reminder for today: Wherever the Good News of Jesus was preached, it met the same opposition as Jesus did, and many of those who began to follow Him shared His suffering and death. But no human force could stop the power of the Spirit unleashed upon the world. The blood of martyrs has always been, and will always be, the seed of Christians.