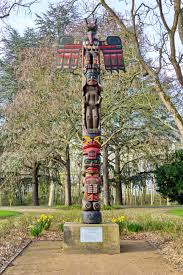 In Sitka, Alaska there is a strong respect for tradition, a great devotion to the Native “ways,” and an appreciation for the Native culture. The Sitka Tribe of Alaska is made up of the Tlingit people and several other tribes and their presence on the southeast Alaskan coast goes back about 10,000 years. The Tlingit people have a rich tradition of “talking story” or story-telling, which is aided by things like totem poles.

The next time we see a totem pole, let’s not be so enamored with whatever (or whoever) is at the top. The challenge is to look to the base, to look to the foundation: that’s where “the elders” of our tribe (and our world) are located.

Today in the Church’s calendar, we celebrate the two “founding elders” of our Church: St. Peter and St. Paul. The New Testament is filled with stories about how these two men heroically devoted themselves to building the Church, but it doesn’t shy away from recounting times when they made their own mistakes. However, one of the things that separates Saints like Peter and Paul from the rest of us is their humble ability to learn from their failings and their willingness to keep serving the Lord in spite of them. May we all learn how to keep moving forward and how to keep building up the Church, no matter what!

Let us pray. “Grant, we pray, O Lord our God, that we may be sustained by the intercession and the help of the Apostles Peter and Paul. Through them, you gave your Church a firm foundation so that we might live in faith on earth, with a longing for our heavenly home. Through Christ, your Son, who lives and reigns with you for ever and ever. Amen.”

A personal not from Fr. Mark: Many of you know that I was able to go to Sitka, Alaska over the weekend for a niece’s wedding. While there, the temperature rose to a balmy 79 degrees on Sunday and the locals were complaining about the “heat wave.” All of you here in Portland probably find that laughable. I was glad to return late Monday and all the more glad to hear that all of you survived the “heat bubble” in good shape. Thanks be to God!