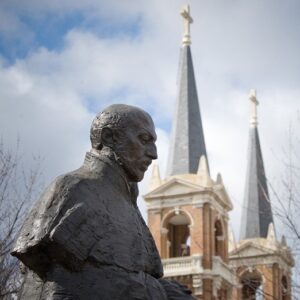 Today, the Church celebrates the life and the memory of the 16th century Jesuit St. Aloysius Gonzaga. Aloysius is the Latin form of his given name, Luigi. In English, the equivalent form would be Louis. He was born into a celebrated family of wealth and prestige. As the first born son he was in line to inherit his father’s title of Marquis. He discerned, however, that he was called to join the newly founded religious order, The Society of Jesus. During his early studies with the Jesuits in Rome, he would regularly go out into the streets of the city to care for victims of the plague. He himself contracted the disease as a result of his efforts for the suffering and died on June 21, 1591, at the age of twenty-three, six years short of his ordination as a Jesuit priest.

Even before his time as a Jesuit, Aloysius was known for his love of prayer and fasting. He received his First Communion from St. Charles Borromeo. As a Jesuit at the Roman College, he continued to devote his time to prayer and practices of austerity. His spiritual director was Robert Bellarmine (who later was canonized and declared a Doctor of the Church). St. Aloysius was canonized in 1726, and three years later declared to be the patron of youth in the Catholic Church.

Let us pray. “O God, bestower of all good gifts, who in the life of St. Aloysius joined wondrous innocence to an equally wondrous love of penance, grant that we may imitate him in his kind and generous care for others. Through Christ our Lord. Amen.”