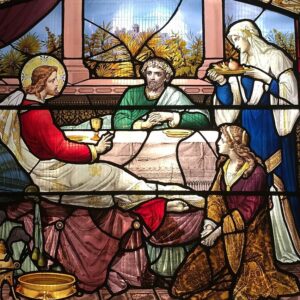 Up until very recently, the Church’s calendar had the Feast of St. Martha scheduled every July 29th. At the prompting of Pope Francis, the revised calendar is now graced by the Feast of Sts. Martha, Mary, and Lazarus. These two sisters and their brother were close friends of Jesus, who apparently often visited their home and went there just a few days before His Passion.

On hearing the name Martha, many still tend to focus on Jesus’ perceived criticism — that her sister Mary had chosen the better part by sitting at His feet and listening to Him rather than bustling about attending to the details of hospitality (Luke 10, 38-42). The truth is that Jesus does not downplay hospitality or housework; rather, He invites Martha to keep her focus on the life of the spirit, even while working, and not to let anxiety distract her. He does not preclude Martha’s listening to Him from the kitchen — where she was preparing a meal for them all. The person in the kitchen will often know exactly what is going on in the rest of the house, right?

On what is now their “combined Feast,” the Church invites us to remember Martha’s deep, personal faith in Jesus. It is she who believed in “resurrection from the dead” for those who die in faith. When Jesus calls Himself “the Resurrection and the Life,” promising that they who believe in Him will never die, it is at Martha’s prompting, as she mourned the death of her brother Lazarus. Responding to her prayer, Jesus raised Lazarus from the dead and many came to believe in Him – after this sign of His life-giving power. The Church also invites us to remember Mary, who chose well by sitting at the feet of the Master and devoting herself to His teaching. And the Church also asks us to remember their brother, who faithfully obeyed the command of Jesus, even after having died, and came out of his tomb.

Let us pray. “Grant, we pray, almighty God, that the example of your Saints may spur us on to a better life, so that we who celebrate the memory of Saints Martha, Mary, and Lazarus, may also imitate, without ceasing, their deeds. Through our Lord Jesus Christ, your Son, who lives and reigns with you for ever and ever. Amen.”