July 20: The Kingdom of God 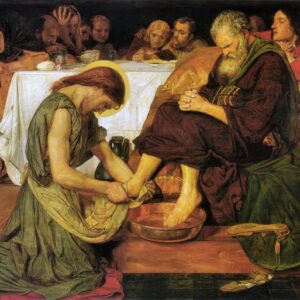 “Thy Kingdom come….” How are we to understand “the Kingdom” as Jesus announced it, preached it, and prayed for it?

With all this in mind, let’s remember that Christ has established us as “a Kingdom people.” He has given us new life as a gift, and He now calls us to live according to the way of the Gospel; to be a people who bear witness to God’s Reign in all that we do, especially by our care for the least among us. In Matthew 25, Jesus provides the standard by which we will be judged when He returns: active love of others. Moreover, in the Sermon on the Mount (Matthew 5), Jesus tells us to “seek first the Kingdom of God and His righteousness.” It is important that our ears and our hearts be wide open when He tells us what seeking the Kingdom looks like: a love for the Lord that manifests itself in service to others, especially the most vulnerable among us; a love that is willing to wash the feet of others. Are we ready to let Christ be the King of our lives? Are we ready to follow His example of unselfish service? Are we willing to say yes to living as “a Kingdom people” both locally and in the world?

Let us pray. “Almighty ever-living God, whose will is to restore all things in your beloved Son, the King of the universe, grant, we pray, that the whole creation, set free, may render you service and ceaselessly proclaim your praise. Through our Lord Jesus Christ, your Son, who lives and reigns with you in the unity of the Holy Spirit, one God, for ever and ever. Amen.”