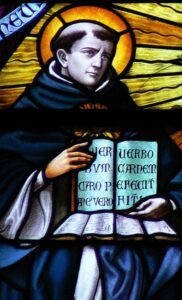 Today the Church celebrates the Feast of Saint Thomas Aquinas, the 13th century theologian who showed that the Catholic faith is in harmony with philosophy and all other branches of knowledge. Saint John Paul II, in his 1998 letter “Fides et Ratio,” said St. Thomas “had the great merit of giving pride of place to the harmony which exists between faith and reason,” knowing that “both the light of reason and the light of faith come from God … Hence there can be no contradiction between them.”

St. Thomas Aquinas was one of the most brilliant thinkers and preachers the Church has ever known and he credited his mentor, St. Albert the Great, with much of his inspiration. Near the end of his life, St. Thomas informed his secretary of his decision to discontinue all of his work because he had realized that everything he had written until then “was worthless.” This was a mysterious episode, accompanied by a vision, that helps us to understand St. Thomas’ personal humility. But it also helps us see the fact that, however lofty and pure it may be, all we manage to think and say about the faith is infinitely exceeded by God’s greatness and beauty – which will be fully revealed to us in Heaven. When all is said and done, St. Thomas is hailed as one of the Church’s most important thinkers and writers, but he was also someone wrestling and struggling. He wrestled with truths, engaged with them, and built his findings around these struggles. He studied truth, engaged with questions, critiqued them, and then put various pieces together so that something with “more truth” came out in the end.

Our own Fr. Mark was ordained a “transitional deacon” on January 28th, 1989. He has, likewise, drawn inspiration from both St. Albert the Great and St. Thomas. It was on that day in 1989 that Fr. Mark made three promises to the Church: to pray the Liturgy of the Hours; to live in obedience to the Archbishop and the Church; and to live a celibate life (that is, not marry). The Liturgy of the Hours is also known as the “Breviary,” a prayer consisting of three psalms, a reading from Scripture, and petitions. It is prayed daily as a participation in the “Perpetual Liturgy” going on in Heaven. At the same time, through the Breviary, we sanctify the secular hours of the day and night on earth. Both permanent and transitional deacons make a promise to obey their bishop and his successors. Unlike permanent deacons, many of whom are married, a transitional deacon (soon to be ordained a priest) embraces celibacy. This means that he promises to forego any exclusive relationships in order to love the Church and her people with his whole being. Please keep Fr. Mark and his classmate, Fr. Steve Clovis, in your prayers so that they will continue to be true to these promises!

Thursday’s Bonus: From Pope Francis’ daily message – “Through prayer a new incarnation of the Word takes place. And we are the ‘tabernacles’ where the words of God want to be welcomed and preserved, so that they may visit the world. This is why we must approach the Bible without ulterior motives, without exploiting it. The believer does not turn to the Holy Scriptures to support his or her own philosophical and moral view, but because he or she hopes for an encounter; the believer knows that those words were written in the Holy Spirit, and that therefore in that same Spirit they must be welcomed and understood, so that the encounter can occur. Therefore, we read the Scriptures because they ‘read us.’ And it is a grace to be able to recognize oneself in this passage or that character, in this or that situation. The Bible was not written for a generic humanity, but for us, for me, for you, for men and women in flesh and blood, men and women who have a name and a surname, like me, like you. And the Word of God, infused with the Holy Spirit, when it is received with an open heart, does not leave things as they were before: never. Something changes. And this is the grace and the strength of the Word of God.”

For those who are curious about the Breviary: https://divineoffice.org/general-instructions/