January 25: The Conversion of St. Paul 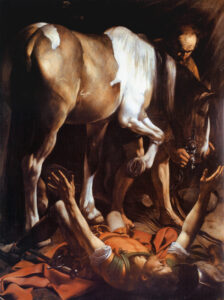 Today’s feastday on the Church’s calendar commemorates the extraordinary Conversion of St. Paul on the road to Damascus.  St. Paul, whose original name was Saul, was born in Tarsus, a city in the province of Cilicia, in what is now the south-east corner of Turkey. As he himself boasted, his Jewish credentials were impeccable. He was also a Pharisee and hence an outstanding observer of the Mosaic Law. It would be quite natural for him to be outraged by the teaching of the disciples of Jesus. As far as he was concerned, it was a total distortion of the most sacred Jewish traditions.

It is not surprising that we first meet St. Paul in the Bible at the execution of St. Stephen, the first person to die for the faith and in the name of Jesus. While Saul did not actually join in the stoning, according to Acts 22, 3-16), he stood by guarding the clothes of those who were doing the deed and clearly looked on with approval. In fact, he may well have been instrumental in the arrest and trial of St. Stephen, as a member of the court.

It is also possible that the heroic death of St. Stephen may well have sown the first seeds of doubt in Saul’s heart. Perhaps he began to ask himself, “Who was this Jesus who could generate such total loyalty in a follower?” Nonetheless, he continued his campaign to persecute the disciples of Jesus and destroy what he regarded as a heretical and dangerous aberration of his Jewish faith. Clearly, however, Jesus had other plans for him – big plans!

Let us pray. “O God, who taught the whole world through the preaching of St. Paul, draw us, we pray, nearer to you through the example of him whose conversion we celebrate today, and so make us witnesses to your truth in the world. Through Christ our Lord. Amen.”