Fellowship with the Saints 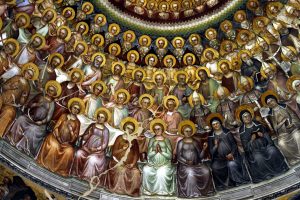 In times of isolation, it can be comforting to remind ourselves that “we do not walk alone.” The saints of God journey with us every step of the way!

St. Catherine of Siena Today (April 29) we celebrate the Feast of St. Catherine of Siena. The central theme of her short life and a theme which resounds clearly and consistently through her experience is this: complete surrender to Christ. What is most impressive about her is that she learned to view her surrender to the Lord as a goal to be reached through time. Though she lived her life in a faith experience and a spirituality far different from that of our own time, St. Catherine of Siena walks as a companion with us on the Christian journey. Her undivided effort to invite the Lord to take flesh in her own life still inspires and challenges believers today.

For much more on St. Catherine: https://blog.franciscanmedia.org/franciscan-spirit/saint-catherine-of-siena-the-feisty-dominican

St. Damien of Moloka’i When Joseph de Veuster was born in Belgium, in 1840, few people in Europe had any firsthand knowledge of leprosy, Hansen’s disease. By the time he died at the age of 49, people all over the world knew about this disease because of him. They also knew that human compassion could soften the ravages of the disease.

As a young man, Joseph entered the Congregation of the Sacred Hearts of Jesus and Mary, taking the name of a fourth-century physician and martyr, Damien. When his own brother Pamphile, also a priest, fell ill and was unable to go to the Hawaiian Islands as assigned, Damien quickly volunteered in his place. He became part of a team of four chaplains taking that assignment for three months each year. Fr. Damien soon volunteered to remain permanently, caring for the people’s physical, medical, and spiritual needs. In time, he became their most effective advocate to obtain promised government support. Soon the settlement had new houses and a new church, school, and orphanage. Morale improved considerably. A few years later, he succeeded in getting the Franciscan Sisters of Syracuse, led by Mother Marianne Cope, to help staff the colony in Kalaupapa. Fr. Damien contracted Hansen’s disease and died of its complications. When Hawaii became a state in 1959, it selected Damien as one of its two representatives in the Statuary Hall at the US Capitol. He was canonized on October 11, 2009.

St. Marianne Cope Hansen’s disease sparked great generosity in this woman who came to be known as Mother Marianne of Moloka’i. Her courage helped tremendously to improve the lives of its victims in Hawaii, a territory annexed to the United States during her lifetime (1898). Mother Marianne’s generosity and courage were celebrated at her May 14, 2005, beatification in Rome. She was a woman who spoke “the language of truth and love” to the world, said Cardinal José Saraiva Martins, prefect of the Congregation for Saints’ Causes. Cardinal Martins, who presided at the beatification Mass in St. Peter’s Basilica, called her life “a wonderful work of divine grace.” Speaking of her special love for persons suffering from leprosy, he said, “She saw in them the suffering face of Jesus. Like the Good Samaritan, she became their mother.”

Father Damien and Mother Marianne shared a deep respect for the innate dignity of each person. This respect was evident in how they lived, worked, ate, prayed, and suffered with the lepers – people who were feared, reviled, and literally cast out of society.

At this time of pandemic and fear, these two saints, honored at the Cathedral of Our Lady of Peace in Hawaii, remind us of the call to sacrificial love for those cast to the fringes of society.

“Amen, I say to you, whatever you did for one of these least brothers of mine, you did for me.” —Matthew 25,40

For an article on the restoration of two beautiful murals at the Cathedral Church in Honolulu: https://evergreene.com/fellowship-in-times-of-isolation/