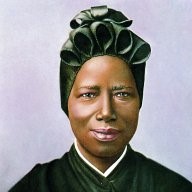 “Seeing the sun, the moon and the stars, I said to myself: Who could be the Master of these beautiful things? And I felt a great desire to see Him, to know Him, and to pay Him homage…” – St. Josephine Bakhita

A testament to the inner strength and grace of St. Josephine Bakhita is that in spite of a life that was marked by overwhelming brutality and pain, she was able to recognize the glory of God all around her. She was born in Sudan in 1869. Her family was affluent, but this did not protect them from the atrocities of slave raiders in the area. Like her sister before her, Bakhita was kidnapped and sold into slavery as a young girl. In an act of irony, her kidnappers named her “Bakhita,” meaning “fortunate” in Arabic.

In the years that followed, Bakhita was sold five different times to cruel masters. Her last sale was to the Italian consul in Khartoum, the capital of Sudan. Although he was kind to Bakhita, he still kept her in a state of slavery, which by this time was illegal in both Sudan and Italy. He presented her as a gift to an Italian merchant, Augusto Michieli, who took her to Italy to be his daughter’s nanny. While at the Michieli estate, Bakhita was given a silver Crucifix, her first encounter with Christ. The image of His suffering body must have resonated with her tremendously. When Michieli was recalled to Africa, Bakhita refused to leave Italy and was able to take her case to court. With the backing of the Canossian sisters and the patriarch of Venice, Bakhita was declared a free woman since her enslavement had been illegal since its inception.

Bakhita became a Canossian Daughter of Charity in 1896 and faithfully served in the Canossian community for the next 50 years.  She would often stand at the door of the community and welcome children by praying over them.

St. Josephine Bakhita was canonized in 2000 and her feast day is celebrated on February 8th. In 2015, her feast day became the first International Day for Prayer and Reflection on Human Trafficking, a cause in which Pope Francis has taken a particular interest. St. Josephine is the patroness of Sudan and the victims of human trafficking.

Let us pray. “Saint Josephine Bakhita, as a child, you were sold as a slave and had to spend untold difficulties and suffering. Once freed, you found the “Master of all beautiful things” and true redemption in your encounter with Christ and His Church. Help those who are trapped today in slavery; intercede on their behalf before God, so that they are freed from the chains of captivity. May God, through your intercession, free anyone who has been enslaved by others. Provide relief to those who survive slavery and allow them to see Him as a model of faith and hope. Help all survivors to find healing for their wounds. We beg you to pray and intercede for all those who long to be free. Amen.”