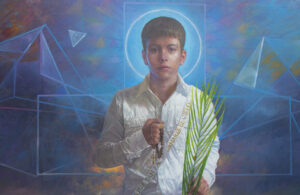 In the last century, the young José de Jesús Sánchez del Río went to visit the tomb of a “Cristero” and Mexican martyr, and asked God to let him also die in defense of the Catholic Faith. Not even a year would go by before his wish was fulfilled. In February of 1928, he was assassinated for the cause of the Faith and for Christ. At his death, Joselito, as his family affectionately called him, was just over a month shy of his 15th birthday. Pope Francis canonized the 14-year-old martyr on Oct. 16, 2016 in Rome, alongside six others.
Witnesses in the cause for San Jose’s canonization testified that “He went to his Catechism classes and was notable for his commitment to difficult parish activities. Though it put his life at risk, since public worship was prohibited, he received the sacraments when he could. He prayed the Rosary each day with his family. Despite being very young, José understood very well what Mexico was going through with the persecution by the government.”
The “Cristeros” were Catholic faithful who tried to defend religious liberty in their country. We think of Mexico as a predominantly Catholic country, but the 1920’s were a supremely difficult time because of the government’s ruthless oppression of the Church. During Joselito’s imprisonment, he wrote a letter to his mother: “Do not be worried about my death, as this would make me suffer … Be courageous and send me your blessing, together with the blessing of my father.” The government asked his family for a ransom of 5,000 pesos, but Joselito rejected the offer, saying that his faith was “not for sale.”
In his captivity, the soldiers tortured him by cutting the bottoms of his feet with a knife and forcing him to walk barefoot to his last resting place, the cemetery of Sahuayo. Once at the cemetery, Joselito was murdered by the soldiers. Right up until the moment he died, at 11:30pm on Feb. 10, he shouted repeatedly, “Long live Christ the King! Long live Holy Mary of Guadalupe!”
Let us hope and pray that St. José Sánchez del Río will inspire us all of us to give witness to Christ in our daily lives.