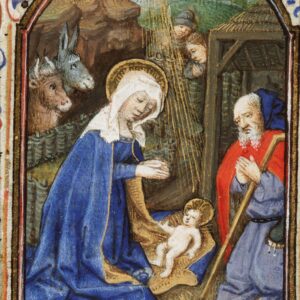 In the Bible, it says in Matthew 1,23 (and is prophesied as well in the Old Testament) “a virgin shall conceive, and they shall name him Emmanuel.” In Verse 25 of the same Gospel it also says to name the child Jesus. So why does the Bible use both names and how did they know to choose Jesus? Emmanuel means “God with us” and Jesus means “God saves,” but why the name Jesus and not the name Emmanuel to fulfill the prophecy?

The texts in Matthew 1,2-23 speak of the angel telling Joseph: “She (Mary) will give birth to a son, and you are to give him the name Jesus, because He will save His people from their sins. All this took place to fulfill what the Lord had said through the prophet, “The virgin will conceive and give birth to a son, and they will call him Emmanuel which means God with us.”

The angel is quoting Isaiah 7,14 “Therefore the Lord himself will give you a sign. Behold, the virgin shall conceive and bear a son, and shall call his name Emmanuel.” In around 738 BC, the prophet Isaiah confronted the unworthy king Ahaz and told him that a good king was about to be born who would succeed him. That was the specific situation to which the prophet was referring. The good king was named Hezekiah, not Emmanuel.  The prophecy took on a greater meaning in reference to the Chosen One: “Messiah” in Hebrew, “Christos” in Greek, and “Christ” in English.

We know from experience that the Bible has layers and layers of meaning. We want a simple meaning: A=B=C, but that’s not always how it works. For example, we know that “Jesus” means “God saves,” but it’s much more than that. Let’s look at the words.

Have you ever considered what the word “god” means?  Our word “god” comes from early German which in turn comes from the Indo‑European word “ghutóm” which meant “the one who is invoked.” In other words, our word “god” just means the one to whom prayers are addressed. It’s not a name – it’s a job description! In other languages there are other words describing the Supreme Being. In the Semitic languages, Hebrew, Aramaic, Arabic, the word is “El,” which simply means “the one who is above.” In the Latin languages, Spanish, Italian French etc., the words for god all come from the Latin word “Deus” which probably means “the one who shines.” The Greek word “theos” is also related to the Latin word “deus.” These are all descriptions, not names.

And what’s in a name? Power! For us to call another person by name means we are equals, and in God’s sight we are, but there are roles that have meaning in human society. Have you ever heard a little child call his parents by their first names? “Come in for dinner, Timmy!” “Not now, Sue and Fred. I’m watching TV.” What is up with that? The child is stating that his parents have no control over him, and they probably they don’t.

Meanwhile, to accord someone a title is to acknowledge authority, whereas to call someone by name is to claim intimacy and equality. God revealed His name to Abraham in order to invite Abraham to intimacy with Him. He said His name was YHWH, which probably comes from the Hebrew word meaning “the cause of existence.” That word is indescribably sacred among Jews. They never say it out loud

So, YHWH the unspeakable name of God and it has a short form that is perfectly permitted, “Yah” or “Yahu” or even “Ia.” Anytime we see “yah” in a Hebrew word or name, it refers to the God whose name we do speak, words such as Alleluia, (praise God) or Elijah (which means my god is God),  and finally the one we are interested in Yahshua (God saves) which is of course known to us in its modified Greek form, “Jesus.” The name Jesus becomes the pronounceable form of the unpronounceable name “YHWH.” So, through Jesus, we have in intimacy with God. We know the fullness of the Love of God in the person of Jesus.

So why Jesus and not Emmanuel? Jesus is the fulfillment of Emmanuel. Remember what El means: “the one who is above.” It is not a name. He is the one who is above, who slowly revealed His name, He is the one who causes being, and loves us. In the end, the Scriptures tell us that Jesus chose to be so ordinary that friends and family in Nazareth knew Him as “the carpenter’s son.” Yet, Jesus was in fact God with us, God as one of us – that’s how much He loved us and loves us still, He is our hope and our salvation, our humble “Carpenter God.” He is with us in order to save us. That’s why the angel told Joseph to name Him Jesus.