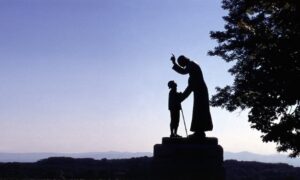 Born in France in the late 18th-century, St. John Vianney served for a time in the army during the Napoleonic period. Afterward, he entered seminary formation to become a priest. He had a very difficult time. He struggled mightily with all of his studies and he had a particularly difficult time with Latin.

Many, including his formation directors and instructors in the seminary (and his own bishop), had very serious doubts that this man who did not have strong intellectual gifts, would be suitable for the priesthood. However, St. John Vianney persevered and finally was ordained a priest in 1815. His bishop, acting on his estimation of this new priest as “a man of few gifts,” sent him to the remotest backwater village of his diocese, the village of Ars.

St. John turned out to be a man of great dedication to his call as a priest and his call to serve his people. He preached in a very simple manner, had a great love of the Blessed Sacrament and the Blessed Mother, and he had a special devotion to St. Philomena.

Through his work as a confessor, he brought about a spiritual renewal that touched not only the people of his parish, but all of France. He regularly spent 14 to 18 hours a day in the confessional surviving on only a few hours of sleep and a diet of boiled potatoes. As the word spread of his extraordinary abilities as a confessor, thousands, including bishops and aristocracy, made the journey to Ars in order to receive his spiritual counsel.

Thus, a man who started his life as one who very few thought would ever amount to anything became, by the time of his death in 1859, the vehicle for thousands of conversions. He is, for us today, an example of how God works wonderfully through those who dedicate their lives to Him and who seek, with all their heart, to do His will. St. John Vianney, a humble parish priest, is regarded by the Church as one of her great figures – because he was so faithful.

St. John Vianney is the patron saint of clergy, especially parish priests, throughout the world.