August 28: The Day of the Lord 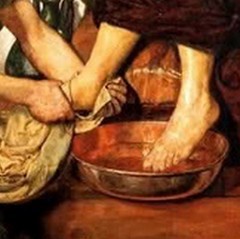 If you go to “Google” and type in the word “humility,” you’ll get about 13 million entries. But if you then go and type “fame,” you’ll get 208 million – about 15 times the amount for humility! That about sums it up, doesn’t it? Fame is more interesting to more people than humility.

It was that way in Jesus’ day, too – which is why what He has to say in the Gospel today is so surprising. Luke 14 is loosely translated: “Don’t hang around with the rich and famous. Don’t take the best seat at the table. And when you have someone over for dinner, invite the poor, the crippled, and the blind. Be one of them — and make them one of you. For everyone who exalts himself will be humbled. And the one who humbles himself will be exalted.”

Let us pray. “Lord Jesus, when you walked the earth, your humility obscured your Kingship. Your meekness confused the arrogant, hindering them from grasping your purpose. Your nobility was seen in how you attended to the destitute and most needy. Teach us to follow after you, grant us the desire to never view ourselves as greater than anyone else, and banish in us all lingering sparks of self-importance. In your holy Name. Amen.”

Something to ponder this week: Just after his election to the Papacy, Pope Francis demonstrated and defined the practice of humility, not by his words, but by his actions. After his election, the new Pope turned down the Vatican limousine ride, instead taking the minibus back to the hotel with his brother Cardinals. At the hotel, he gathered his luggage, thanked each member of the staff, and paid his own bill. He did not pass off these seemingly unimportant tasks to a papal aide. Remember, it was not as if he had nothing to do! Pope Francis, this humble servant of the Lord, remained Francis, humble servant of the Lord, even after being elected to lead the Universal Church. His humility was not so much a series of individual actions or practices as it was a way of life for him – as a priest, archbishop, cardinal, and Pope.