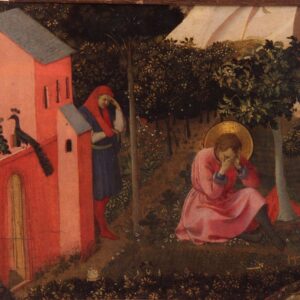 St. Augustine was born in 354 in Tagaste (present-day Algeria). His mother, St. Monica, was a devout Christian and his father, Patricius, a pagan. He was brought up as a Christian but not baptized. He studied rhetoric at the university in Carthage with the intention of becoming a lawyer. However, he gave up this idea and instead went into teaching and study. His study of philosophy, mostly of Plato, and later of Manichaeism over a period of years resulted in his effectively abandoning the Christian faith of his mother.

Eventually, St. Augustine came under the influence of St. Ambrose, the bishop of Milan. In the year 386, he was greatly inspired by reading the life of St Anthony, a Desert Father. There is also the famous story of his hearing the voice of an unseen child, while sitting in his garden in Milan. The voice kept chanting, ‘Tolle, lege’ (‘Take and read’). He opened his Bible at random and the text he found happened to be from Paul’s Letter to the Romans: “Let us conduct ourselves properly as in the day, not in orgies and drunkenness, not in promiscuity and licentiousness, not in rivalry and jealousy. But put on the Lord Jesus Christ and make no provision for the desires of the flesh.” (13, 13-14) After a long interior conflict, which he describes in his Confessions, Augustine was finally converted. He decided to give up his career and his former ways and was baptized.

Augustine’s intellectual brilliance, broad education, passionate temperament, and deep mystical insight resulted in a personality of very special, if not unique, quality. His interpretation of Christian revelation revealed in his many writings probably has had more influence on Christian thinking than anyone since St. Paul. He died at Hippo on August 28th in the year 430.

Let us pray. “O God, renew in your Church the spirit you gave St. Augustine. May we thirst for you alone as the fountain of wisdom and seek you as the source of eternal love. We ask this through Christ our Lord. Amen.”

Bonus: Speaking of thirsting for God alone, He who is the source of eternal love, take a look at this article which will soon be published in the Archdiocesan newspaper The Catholic Sentinel: https://go.sentinel.org/3mB1IKc