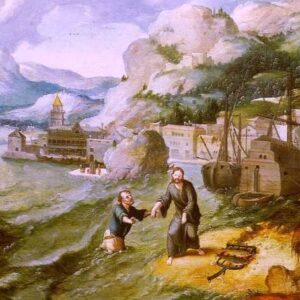 The Scripture readings we share, Sunday after Sunday, invite us to enter into them: which character are we? how do we see ourselves in the drama that unfolds? what is the Lord saying to us in His stories or teachings? This weekend’s readings provide a unique twist: could we imagine ourselves as among the fish that Jesus sent Peter out to catch? Really? Among the fish?

Like them, we are immersed in a sea of troubles and distractions, moved by every ripple of excitement, shaken by the level of doubt and disbelief that marks our world today. We spend so much energy on what are ultimately unimportant things – “web surfers” beware! We dally with temptation, and we let ourselves be hooked by unhealthy lures, from conspiracy theories to drugs to vacuous and empty celebrity. It is little wonder that Christ chose simple folk, like fishermen, when He chose His first followers.

This Third Sunday of Easter presents “the miracle of salvation” as an offer – from the Lord to us. Through His Church, Christ has caught us in His net of salvation, a net of grace. He says: “The kingdom of heaven is like a net that was thrown into the sea and caught fish of every kind.” Though it remains unseen beneath the surface, we are drawn into it, if we take Him up on His offer.

The miraculous catch of fish in John 21, 19-31 is really about the grace of God. There is no telling what size the catch will be until the net is finally drawn in at the end of time. Like Sunday’s “catch” in the Gospel, it may well astonish even the most seasoned fisherman. Who knows what unique fish will be caught there sputtering and gasping at the wonder of God’s mercy? The “big catch” is Christ’s answer to those who imagine that most people are outside His reach. Let’s be reminded: “Nothing is impossible for God.”

Let us pray. “God of life, in your risen Son you reveal your abundant grace and your abiding presence among us. Fill us with reverence as we come before you each new day. Grant us courage and zeal in bearing witness (before the world) to your Son Jesus Christ, who lives and reigns with you for ever and ever. Amen.”