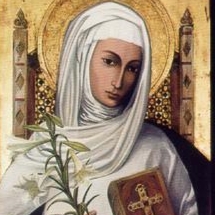 St. Catherine of Siena was the youngest child of a very large family; she was born in 1347. She began to have spiritual “visions” from an early age. At the age of 16, she joined the Dominican Tertiaries (Third Order).  Throughout her life, she ministered to the poor and afflicted. She spent much of her life trying to bring peace to the Church.

St. Catherine’s writings are considered to be among the most brilliant in the Church and Pope Paul VI named her a Doctor of the Church in 1970. (She died in Rome in 1380 and was canonized by Pope Pius II in 1461.)

St. Catherine on God’s Mercy: “Even if all the sins that could possibly be committed were gathered together in one person, it would be like a drop of vinegar in the sea of God’s mercy.” St. Catherine, pray for us.

An article from Christianity Today: https://www.christianitytoday.com/history/people/innertravelers/catherine-of-siena.html