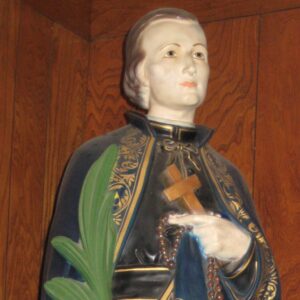 In the 1800’s, St. Peter Chanel was sent (as a missionary) to what was called Oceania (what we would call the South Pacific … Fiji, Samoa, American Samoa, and the lesser-known Futuna). The Bishop who sent him gave him this instruction: “Suffering for Christ means suffering because we are like Christ.”

By his own admission, St. Peter struggled (suffered) with a completely new language (which he eventually mastered) and it was supremely difficult to be in such a remote location. On top of all of that, he had “little apparent success” and lived in severe poverty, but he maintained a serene and gentle spirit, living with endless patience and courage. He was often reminded: “Suffering for Christ means suffering because we are like Christ.”

A few people among the native population were baptized, and a few more were being instructed. But when the chieftain’s son asked to be baptized, the chieftain himself stirred up opposition and had Father Peter Chanel beaten to death. Interestingly enough, within two years after St. Peter Chanel’s death, the whole island of Futuna became Catholic and has remained so.  St. Peter Chanel is the patron saint of all of Oceania (the South Pacific) because the same faith spread to Fiji and the Samoan Islands and remains strong today.