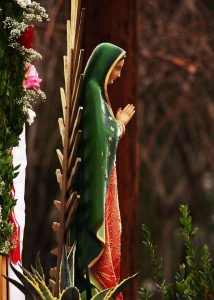 Today, May 22nd, marks the one-year anniversary of the tragic and accidental deaths of Ana and Kaylee Moreno-Hernandez. These two young women, both still teenagers and active members of our parish community and youth groups, died in an automobile accident on their way to school. That day and the days that followed rocked our parish and the ripple-effect was felt far and wide in North Portland and beyond.

Our prayers and generous support for the Moreno-Hernandez family began immediately and, in some ways, have continued ever since. Luis and his wife Juana and their sons Luis and Johnny will gather on Saturday for a chance to mark this first anniversary of the deaths of their daughters and sisters. They express their gratitude for the parish’s outreach in prayer and support. Please continue to pray for them and for their extended family.

The following is an excerpt from the homily shared a year ago: “We have reached way back into the Old Testament Scriptures today, the Book of Wisdom, to hear a reminder that it is “the foolish” who look at death and say, “well, that’s the end.” Or, “there’s no hope.” St. Paul, in his Letter to the Church in Rome, says, that’s a bunch of nonsense. The end? No hope? He asks and answers his own question in his letter to the Romans: “What can separate us from the love of God?” His answer is one word: “Nothing!” He then goes on to explain what “nothing can separate us from the love God” really means: no height or depth, no power, no dilemma, no problem, no suffering, no challenge . . . nothing!

All of this sets us up perfectly to encounter two disciples on their way to Emmaus: it is Easter Sunday; they are leaving Jerusalem; they’ve only heard second-hand accounts of the resurrection. In the Greek text of the Gospel, it says they have faces like horses, that is – long faces, they are sad, not much of what happened in Jerusalem made sense to them in the end . . . but Jesus appears to them as says (loosely translated), “Here’s why: it wasn’t the end!”

The Gospel affirms how the Book of Wisdom has described all of this: it is foolishness to think death has any power over us, to think that death has the last word, to live like something (anything) is more powerful than the grace given in and through the Risen One: Jesus the Lord. What can separate us from that grace? Nothing!

Eternal rest grant unto them, O Lord. And let perpetual light shine upon them. May the souls of Ana and Kaylee and all the faithful departed rest  in peace. Amen.